Follow Us
Latest posts by Christopher Moye (see all)

In more than 600 businesses and non-residential structures each day in the United States, the usage of portable fire extinguishers are the difference between minor, manageable fires and the more severe property and life threatening fires. Seriously? Yes, those innocuous commercial wall decorations are used over 600 times each day throughout the United States. Fire extinguishers your first line of defense in a workplace fire.

A fire can consume a property in a few short minutes, which is why the first few seconds of a fire are so critical. According the National Fire Protection Association, 93% of deaths and 95% of property damage takes place once the fire has progressed beyond the early stages. More fires can be stopped earlier if the public is educated on how they can use portable fire extinguishers from consuming property and taking lives.

94% of the times a portable fire extinguisher is used, it puts out the fire. Typically within the initial two minutes.*

Know how to use a portable fire extinguisher:

Use a portable fire extinguisher when a fire is confined to a small space and is at the initial stages. It is important to be aware of one’s own individual safety before attempting to use a fire extinguisher. If appropriate sound the fire alarm or call the fire department immediately.

Before using an extinguisher be sure:

Follow the simple P.A.S.S. approach to using fire extinguishers.
Pull: Pull the pin.
Aim: Aim the nozzle at the base of the fire
Squeeze: Squeeze the operating lever to release the extinguishing agent.
Sweep: Sweep the nozzle from side to side until the fire is out. Be careful to watch for re-ignition.

Know when to go. Fire extinguishers are only one element of fire protection and response. The primary element is always… safe escape.

Portable fire extinguishers are proven to save lives and property by putting out or containing small fires until the fire department can arrive. They do have limitations though. Due to the speed which fires can grow and spread the number one priority for all building occupants should be to exit safely.

Education, Maintenance and Testing, and Awareness are the best ways to ensure safety in the usage of fire extinguishers.

Guardian Security has a team of experienced staff available to conduct a Service & Compliance Assessment for your facility to ensure that Portable Fire Extinguisher Code Requirements, Best Practices, and functionality are being followed and inspected. Contact us today to schedule your assessment. 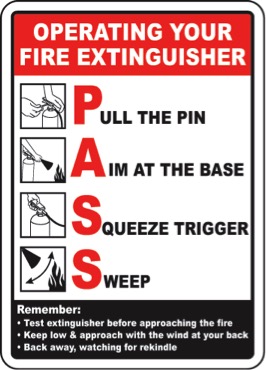